Meeting Your Half-Orange All Over the World

April 15, 2015 | Comments Off on Meeting Your Half-Orange All Over the World

Every once in a while, I am blessed to find out that Meeting Your Half-Orange is making the rounds to other cities and having a big effect on people. And in these two recent cases of the book reaching other countries, the news absolutely, positively made my day.

Case #1: I got a wonderful email from a reader named Vanessa Valdez, who read Half-Orange during a last-minute, life-is-short trip to Bali. The bonus was, Vanessa liked the book so much that she got in touch and we ended up being able to meet in person, which was one of the most joyful mornings I’ve had in a long time. She said I could share the gorgeous photo of her in full-on Balinese optimism mode, so here she is. 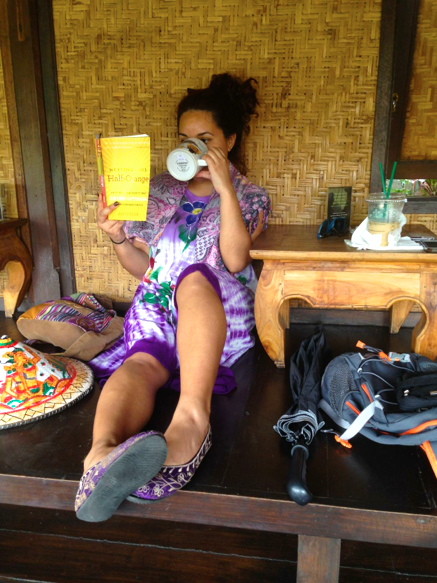 Case #2: I just found out that Meeting Your Half-Orange will be published in China! The book will be translated into Chinese characters, allowing the message to spread to even more cool singles looking for a new way to approach dating and life—the profoundly positive way. I will keep you posted on the Chinese launch!

And to those of you who have read or considered the book, or have helped spread the message yourself, thank you. Truly. All I wish for is that the half-orange mindset will inspire more amazing people toward a big, bold, happy life with the perfect partner to love right beside you.

Get My Happy Love App!

Whew! I’ve just updated my iPhone and iPad app Half-Orange Optimisms to a splashy new 2.0 version. And in addition to making sure it works on all the iOS platforms and the newest iPhones, I’ve added a whopping 150 *brand new* Optimisms to it. Which means the app now has more than 250 positive ideas to happy up your love life. Can you take it? I can barely take it.

You can find out more about the Half-Orange Optimisms app on the iTunes store. If you already have the app, be sure to update it to Version 2.0! And if you don’t have it, check it out. Because these are all original words of mine, and I wrote every single positive idea with happy love in mind. Here’s the gist:

Do you sometimes feel discouraged with dating and love? If you could use a pep talk every now and then about yourself and your dating life, Half-Orange Optimisms is here.   Your “half-orange” (the translation of the Spanish term mi media naranja) describes your sweetheart and perfect other half. And the path to yours can be paved using dating optimism. Use them as a companion piece to the book Meeting Your Half-Orange: An Upbeat Guide to Using Dating Optimism to Find Your Perfect Match by Amy Spencer, or just dive into dating optimism on your own!

These are not reprints of quotes or lines you’ve read before. Half-Orange Optimisms are freshly original tips and insights that provide the dating optimism you want on demand! Like a Magic Eight Ball of love wisdom, they’re the words of dating and life encouragement you need to hear at the time you need to hear them.   Just ask for some sweet orange guidance, then shake the phone for the dose you need to turn on your positivity and draw the right person straight to you. And when an Optimism really hits home, email it to yourself or a good friend for an added boost.

FEATURES:
• Over 250 original, unique Optimisms written by Amy Spencer.
• Get a new Optimism every time you shake.
• Optimisms are more than just inspiring quotes—they provide actionable suggestions and ideas for improving your relationship point of view.
• A bright animated 3D orange delivers your message.
• Email your favorite Optimisms to yourself or a friend. Or save one to paste in your Notes app, a post or a tweet! (Note: There is not a Saved Favorites page within the app.)
• Optimisms are for all singles—women and men, single or divorced, of every age. If you are seeking your other half or just want reminders to make the most of a love you have, these words are for you.  Your thoughts about dating can change your love life forever. Let Half-Orange Optimisms help you put your thoughts in a positive state of mind. Visit amyspencer.com to contact Amy and learn more about this app, as well as the books and the optimism that goes with it.

Big fixes and updates with this one! Cleaned out all the bugs and freshened it up, so it’s now working perfectly and up to date for all iOS and iPhones from the 4 on. Plus: I’ve added a whopping 150 *brand new* Optimisms in this version, so the app now offers more than 250 fresh, inspiring thoughts to enhance your gorgeous life even more.

Watch the Happiest Video About Happiness Ever!

January 27, 2014 | Comments Off on Watch the Happiest Video About Happiness Ever!

If you want more love and bliss and happiness in your life, I have a simple secret I want to share with you that can help you get it.

If  you have two minutes, find out a profoundly simple secret about how happiness really works. Find out how a happy life checklist can change your life, and you can feel happier instantly. As in today, right now. And if you’re inspired by the video and want more ideas on how to savor the small moments of happiness every day—in areas of love, grace, confidence, vitality and delight among others, for a life of true, balance and bliss—grab the book that inspired it today! Buy The Happy Life Checklist: 654 Ways To Find Your Bliss on Amazon.com.

I’m really excited about this one: My new book The Happy Life Checklist: 654 Simple Ways to Find Your Bliss will be on shelves in just over a week! (Release date: Feb. 4) 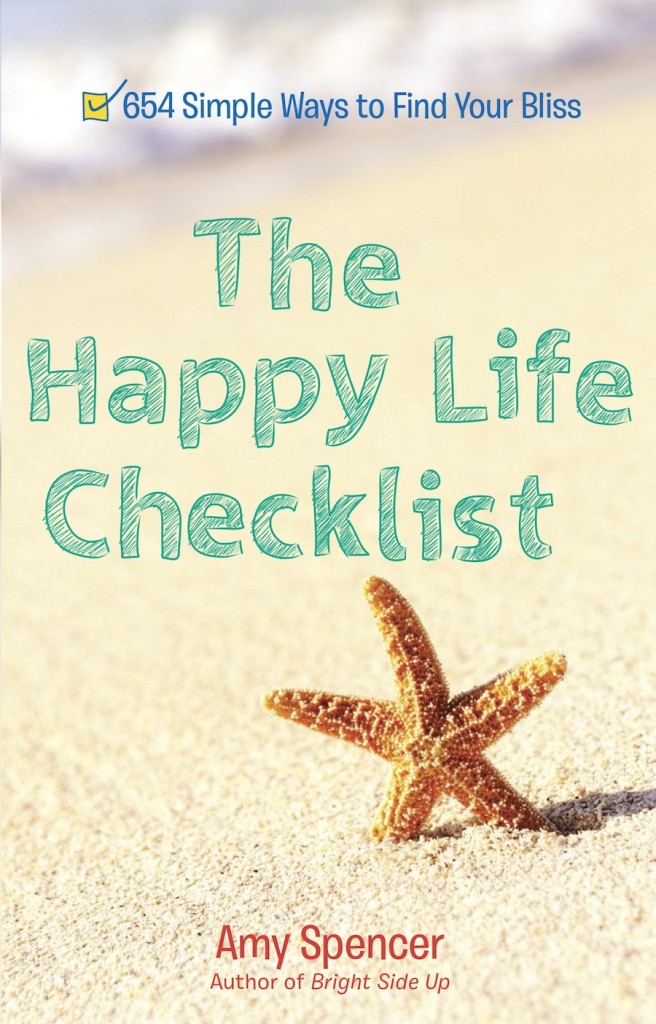 It’s a collection of small ideas that will help you savor and celebrate every day. The book covers ten areas you might be interested to work on in your life, including adding some delight, more bliss, some grace or confidence—and one of the most important things, more love.

Because happiness is in the second and minutes of life, not just in the years. Start filling your list with more fun things today.

Available now for pre-order on Amazon.com. So…ready to get your happy on?

Does thinking about your half-orange make you want to sing? Well, it sure made singer-songwriter Casey Dinkin want to. She wrote me a note explaining,

“I am a singer-songwriter and I recently wrote a song called La Media Naranja (My Better Half), about orange halves in love.”

As she sings: “If they make cocktails with you, they’d better squeeze me in there, too.”

Me and My Half-Orange at Art Basel

Last week, my half-orange Gustavo and I hit Art Basel in Miami. Not only was it a weekend full of fabulous art shows, but look! I found my other half-orange right in the middle of the Convention Center… 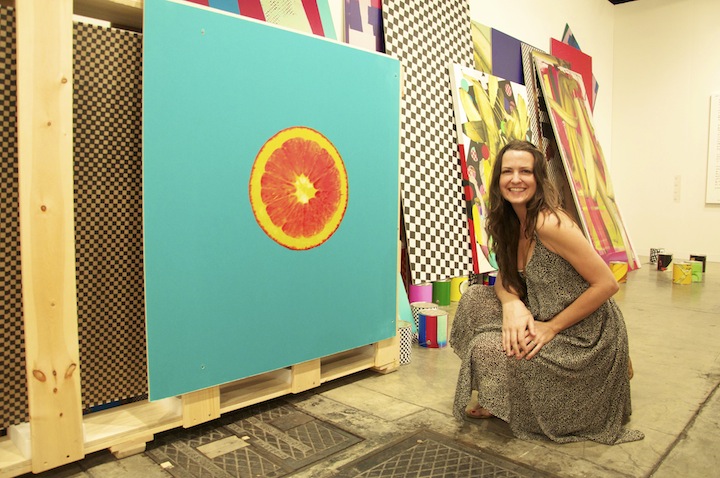 HA. I haven’t seen an orange-half I haven’t liked. Here’s to the art of finding yours.

How To Live Happily Ever After

December 8, 2011 | Comments Off on How To Live Happily Ever After

I have to hand it to author Jenna McCarthy, the scribe behind If It Was Easy, They’d Cal the Whole Damn Thing a Honeymoon. She’s not only hilarious (check out the funny trailer for her book), but she’s also brave and wise. The hilarious Jenna McCarthy mentioning my book in her TED talk!

How do I know this? Because she recently gave a speech about “How to Live Happily Ever After” for a TED conference in front of a packed house (brave) that was full of smart and surprising advice on how to be happily married. And even wiser? In talking about how to find the right partner to marry, she featured my book cover for Meeting Your Half-Orange in her speech! (Pay attention at the 9:20 mark).

I’ve picked up a few tips from Jenna’s speech, which is why I’m going to buy my husband some really fattening cookies today. Watch her talk and you’ll learn why that’s just one of a few fabulous ideas for living happily ever after. Here’s the video—find a free 11 minutes (oh, let’s be honest, now is just perfect) and enjoy!

Some Dating Optimism for Single Parents

August 22, 2011 | Comments Off on Some Dating Optimism for Single Parents

What do you do when you’re a single parent and you get asked out by someone who doesn’t want to get married and have more kids like you do?

Well, if you’re Christine Coppa, who wrote about her recent dating experience in a new post for Parenting.com, you tell him you’re not interested. What do I think of her move? Find out:

Read her story, a shout-out for Meeting Your Half-Orange and my expert take on it all as a relationship optimist!

I have to say “Thank you” to a Meeting Your Half-Orange reader named Blanca who sent me this cute note:

I am Spanish and on Facebook I’m always adding new fan pages to my profile that I find funny. So, two of them, which have quite a lot of fans are:

1. I’m afraid that with my half orange, someone has make himself an orange juice.

2. Until I find my half orange, I’ll be eating tangerines.

To Blanca, I love them! You know why? Because to the rest of us, it’s a great reminder that while searching for a half-orange in life, it’s important to have a good sense of humor about it all. I mean, what else can keep you going through all the so-so dates and online dating flops? Laugh about it! And pour yourself some O.J. You gotta get your sweet tooth satisfied somehow.