February 18, 2011 | Comments Off on NATURAL HEALTH and Half-Oranges

I loved this recent mention of Meeting Your Half-Orange in Natural Health magazine. In the story below, “Health nut seeks same” by Maureen Healy, I offered my advice on why finding someone with similar interests can enhance your relationship from the inside-out—the piece then shares suggestions of some online dating sites that cater to particular lifestyles.

The Denver Post: How to Use Dating Optimism in the New Year

February 15, 2011 | Comments Off on The Denver Post: How to Use Dating Optimism in the New Year

Recently, I contributed to a story in The Denver Post called New Year, New Love: The Time is Right for Dating, by Sheba R. Wheeler. In it, I gave her some of my thoughts on how to keep your eyes looking more positively on the prize of love at the start of a new year.

One of my contributions included this:

“Take a break. If you’ve been dating full throttle without success, it can begin to feel like work and become a source of frustration and pressure. “Now suddenly you are going out into the world with all this energy that says you are tired, you are over it, but do you still want to date me?” says Spencer. “Who wants to date that?” Take a break to reconnect with yourself and remember what’s good and lovable about you.”

If you liked that, go to the New Year, New Love article in The Denver Post, or click on the image below. 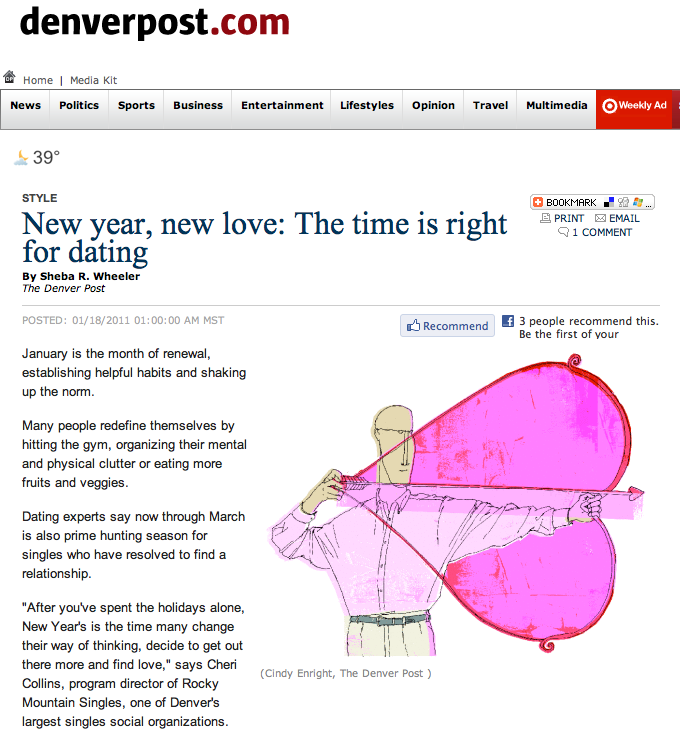 February 14, 2011 | Comments Off on Seventeen Magazine: My Optimistic Dating Advice

It’s that time of year! My positive dating advice is featured in a fun new story this month in Seventeen magazine (note my admirable position as the “17 Expert” for the piece!)

In the story “Spring Clean Your Love Life,” writer Elisa Benson featured some of our fun and purely positive tips on how to dump your bad memories and bummer attitude and embrace a happier, healthier, lov-ier you in your dating life.

Pick up the new March 2011 issue of Seventeen to see the whole story. And for more advice like this, for singles from seventeen to ninety-seven, just order the brand spankin’ new paperback edition from Amazon.com of Meeting Your Half-Orange.

What a great honor this month: 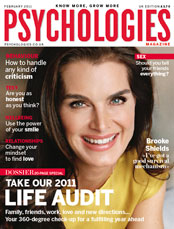 A fabulous journalist named Suzy Greaves wrote about the concept of dating optimism in a three-page feature called “The Optimist’s Guide to Dating” in the most recent issue of Psychologies magazine—which is like England’s version of America’s Psychology Today.

And my book Meeting Your Half-Orange—with it’s science-based focus on the neuropsychology of thinking positively and the benefits of being optimistic about love—fit right in.

Also fun: One of my positive comments about how I believe you should be picky in love was featured as the story’s pull quote, a great reminder when it comes to what you’re looking for: “You have my full permission to stop dating men you don’t find smart, interesting or physically attractive.”

Pick up the copy of the latest issue of Psychologies if you’re in the U.K. or check out the piece here:

It’s a special week for half-oranges and anyone looking for one. Because today marks the launch of my new paperback of Meeting Your Half-Orange, which I’m celebrating by doing a FABULOUS GIVEAWAY at TheDatingOptimist.com!

Entering is super easy and super fun: Comment on the giveaway post at The Dating Optimist andtell us one thing you love about yourself and your life…that’s it! Just spread the optimism and you’ll be entered to win a brand new paperback copy of MEETING YOUR HALF-ORANGE: An Utterly Upbeat Guide to Using Dating Optimism to Find Your Perfect Match, and a hot Bikini. To be more specific, this hot “Milla” Kushcush bikini:

Okay, now head to the giveaway and good luck!

Inside the Author’s Studio

I have the best agent in the world: Laurie Abkemeier, a literary agent with DeFiore and Company who also reps Marley & Me’s John Grogan. A former editor with Simon & Schuster and now an agent for over seven years, Laurie has wisdom from all sides of the writing fence. Also fun? Laurie’s new Tumblr blog, which now features an entertaining section called Inside the Author’s Studio.

This month, to celebrate the launch of the new paperback edition of Meeting Your Half-Orange, she featured me! Here are my answers (based on James Lipton’s Questionnaire which was based on the Proust questionnaire): Inside the Author’s Studio with Amy Spencer.

And if you’re a writer or want to be? Then you must download Laurie’s FREE “Agent Obvious” iPhone App which is jam-packed with her “Agent Obvious” insights about all things book publishing: query letters, proposals, editing, writing, contracts, marketing and more.

Now, I hope I didn’t embarrass myself with my choice of superpower or favorite sitcom…

HEALTH Magazine names The Dating Optimist a “Blog We Adore”

January 8, 2011 | Comments Off on HEALTH Magazine names The Dating Optimist a “Blog We Adore”

Pick up the Jan/Feb 2011 issue of Health magazine, and you’ll see that my blog was named a “Blog We Adore” for the issue, and featured a quote from the blog archives! Hilariously, it was from a posting called Dexter and You: Take Your Leap of Faith. Nothing like finding comfort in life from the character of a serial killer!

But you know what? That’s precisely the point of my site, The Dating Optimist: Positive life messages can be found in the craziest places, sometimes. And I want to do my part to help you work on your focus to find them all around you. Joy and optimism can be ours if we make the choice to use it.

So thanks Health magazine, I adore you right back!

Someone Get This Girl a Half-Orange!

January 5, 2011 | Comments Off on Someone Get This Girl a Half-Orange!

More and more singles are now looking for their half-oranges—their perfect, sweet other halves—and this latest profile that I found on a site called “Witty Profiles,” is my new favorite way to ask for one:

God, I love blogs. Especially personal ones where I can follow someone’s journey through life or love or dating. And this new one tops my list for obvious reasons: “The Search for My Half-Orange” was created by a Meeting Your Half-Orange reader who has taken one of the most important tenets of dating optimism seriously: You have to make your message clear and shout it wide. She’s doing just that. Kudos!

As I wrote about in a recent OPTIMISM WORKSHOP on TheDatingOptimist.com called “How Not To Make a New Year’s Love Resolution,” the most important part of your search for love is being open to it. It’s not about sniffing along the ground to pick up the scent of a person you want to date, right? It’s about standing tall and proud in your own life, looking up and outward and sending the message that you are open and ready for love. Only then can it come a-knocking.

So check out Tanita’s site, as she makes some great points about being exposed to way too much negative relationship stuff, and she’s really working on embracing happiness in life and love in 2011. I wish the same for you. Happy New Year!

All the Koreans in the house say “Hollaaa!”

My App, Half-Orange Optimisms, is now reaching out to a new Korean audience, thanks to a new book called 98 Money Making Apps that has featured my App. Well, hmm, at least I think that’s what the book is called. That’s the cover on the left there, so if you do read Korean and it turns out the book is called “Loser People Who Made The Suckiest Apps of the Year,” will you let me know?

I was interviewed for the book about what inspired the App and how I designed it and got it made, and it ended getting its own chapter. What fun, right?

Here’s a shot of some of my chapter:

An added bonus: My App falls right after a chapter on the App for the amazing Cyanide and Happiness—and if you don’t know this brilliantly cute comic and their books (their new one is Ice Cream and Sadness), you must check it out! And get their App, too, while you’re at it, I just did.

You can buy 98 Money Making Apps through the LeeChung Soft website if you’re interested and, you know, caught up on your Korean.