Amy Spencer was born and raised in Sea Cliff, New York. She spent a decade working as an editor for Maxim, Glamour and Star magazines. She’s since written celebrity profiles, features, essays and relationship advice pieces for In Style, Harper’s Bazaar, New York, Glamour, Match.com, Cosmopolitan, Health, and Real Simple, among other publications.

Amy spent two years hosting the call-in relationship advice show “Sex Files” on Sirius satellite radio’s Maxim channel. She has provided relationship advice on Howard 100 News, and has appeared on VH1, Access Hollywood, E! and Entertainment Tonight. Following in the footsteps of fellow love experts Greg Behrendt and Dan Savage, Amy was also a blogger for Chemistry.com’s The Great Mate Debate and does work as a dating advice spokesperson. Amy is the creator of TheDatingOptimist.com, through which she provides a dose of life and love positivity.

Amy also loves Lost and lives for The Bachelor. She watches far more hours of others competing on cooking shows than actually cooks herself—though if asked to make her signature dish, she’d bang out a sesame lemon chicken that’s to die for. She’s so wildly addicted to popcorn she’s been known to walk into a theater to buy a combo-to-go instead of a movie ticket. She plays paddle tennis for fun, really wants to own a stand-up paddle surfboard, and really does own a tricycle. (It’s an adult tricycle, and it’s awesome.) And she’s so inspired by her parents marriage of forty-two years and going that it’s become a passion of hers to help others attract healthy, nurturing relationships that make them absolutely shine. She currently lives with her half-orange—her husband—in Venice, California and they spend their summers in Montauk, Long Island. 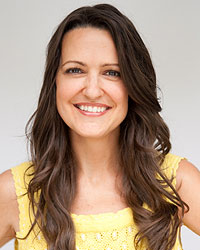